(Up front disclaimer: I am treating my personal experiences as universal in this post. I think the things I am saying in this post are fairly universally true, but there are obviously going to be people who experience this differently)

Well, to a large degree, sexiness is competence.

I'm serious. You must have noticed how sexy people being good at things is. This is a general thing. There's something intrinsically attractive about competence, and most forms of sexiness can be framed as competencies.

(An example of a non-competency sexiness is that someone being attracted to you is also sexy, and is not a competency per se unless you're self-assured enough to view it as evidence of them having very good taste)

Experiencing someone as sexy is about fascination. You see something about them, and it draws you in, and makes you want to learn more about them and to explore it. It makes you want more of it. And nothing does this like looking at someone and noticing just how phenomenally good they are at something.

Not all competencies are equally sexy of course. An amazingly good ballet dancer is (for most people) intrinsically sexy than an equally amazing chess player. But... the latter isn't not sexy, as long as you're well placed to appreciate their competence (If you don't understand chess you probably won't find it sexy).

But, even for most people who understand chess, the ballet dancer is probably still sexier.

This is true even independently of body type. If you somehow had someone who was both an expert ballet dancer and an expert chess player, almost everyone would experience watching them perform ballet as sexier than watching them play chess.

Which competencies are perceived as sexy is highly individual, but by and large physical and emotional components of competencies are sexier than mental ones. The reason for this is pretty straightforward: For most (but by no means all) people, the physical and emotional components of sex take precedence over the intellectual ones, so this sort of competence is intrinsically more sexual.

Some people are, of course, unambiguously better at physical appearance than others. Some people really are just going to be effortlessly attractive. The rest of us have to work at it, to a greater or lesser extent. However, this is a normal part of competency. Someone who is an amazing ballet dancer has worked incredibly hard at it, but they also probably have intrinsic advantages (strength, balance, body type) that others who are less good do not.

How do you do competence at physical appearance? You do it by performing an aesthetic.

Different aesthetics will appeal differently to different people, but unless the aesthetic is utterly absurd (clowns aren't sexy no matter how good they are at performing the clown aesthetic. No shaming intended if you're into that, but I am never going to understand your mindset on this subject), performing it well is always going to be fairly sexy.

Edit to Add: OK fine a friend has convinced me of the possibility that sufficiently competent clowning might be sexy too.

This is why gender is such a big thing in most people's experience of sexiness: Aesthetics tend to be heavily gendered, and a great deal (not all, maybe not even most, but a major component) of what gender is for most people is conformance to a specific gendered aesthetic. It would be an exaggeration to say that gender is intrinsically sexy, but performance of gender gives people many exciting opportunities for exhibiting sexiness.

Interestingly, this is true even for aesthetics that are "wrong" for your gender. Competent performance of an aesthetic designed for a gender different from your own can be incredibly sexy if you can pull it off, it's just easier for most people (both through training and through how the aesthetic was designed) to perform sexiness with an aesthetic that matches their gender. It's the performance of the aesthetic itself that is sexy, your appearance just defines how easy it is for you to perform any given aesthetic competently.

It is at this point I must tell you a fact that I, as a card carrying bisexual, am all too acutely aware of: in western anglophone cultures, women are on average substantially more attractive than men.

Before I continue, let me show you an extremely attractive man. 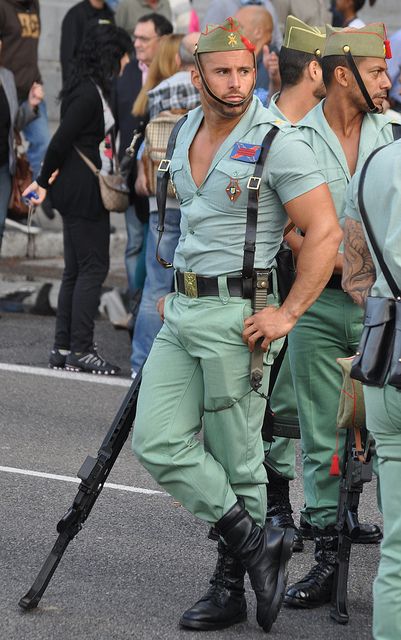 Sexy, right? (Dear Spanish soldier man: In the extremely unlikely event that you're reading this, I'm very sorry for objectifying you in this way. Well... mostly sorry. It's in a good cause.).

Why is he sexy? It's because he is performing an extremely masculine aesthetic very competently. You don't need to be nearly this good at masculinity to perform it competently enough to be sexy. This is fairly upper tier.

Also, if you read the comments, a lot of people are coming to an inescapable conclusion: He looks really gay.

This is bullshit of course. Maybe he is, I don't know him, but just based on weight of numbers I'm going to say probably not. He certainly reads as gay in our (western, anglophone) culture, but there's a very specific reason for this: We treat competent performance of most masculine aesthetics as gay (there are a few exceptions, but they mostly tend to be for celebrities or people who can pretend to be doing it on natural talent alone, and even then there's a bit of it).

The basic reason why women are more attractive on average is that they are better at performing an aesthetic than men are. This is for reasons that are actually quite bad, for both men and women but in different ways.

The incentive structure is bad (women should not be punished for not wanting to invest effort in their aesthetic if they don't want to), but the lack of widespread cultural knowledge for men on how to improve their aesthetic is also a major problem for us.

The result is that men are socially punished for trying to be good at sexiness, and exist in an environment that is mostly extremely unsafe for them to experiment, and consequently there is a kind of massive cultural learned helplessness where men want to develop their aesthetic competency in sexy ways but honestly don't know how to.